Elected officials on local and state level meet with NYS DOT to discuss concerns, needs for State Route 98S in the Village of Arcade 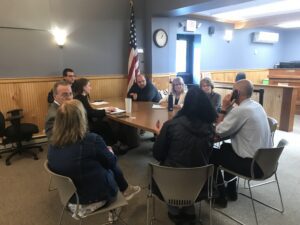 Photo by Casey Dunlap
Arcade Mayor Donna Schiener was accompanied by Clerk Jennifer Kraft and Superintendent of Public Works Larry Kilburn at a meeting on Thursday, June 9 at the Village Office to meet with other elected officials and representatives from New York State Department of Transportation, as well as two residents, to discuss the condition of Liberty Street/Route 98S in the Village and plans for road construction.

“Everybody knows why we’re here … the horrible conditions of Liberty Street/Route 98 South, and we have made people aware of this for many, many years now, 11 years,” said Village of Arcade Mayor Donna Schiener.

Liberty Street/Route 98S in Arcade is a state road where the Village has no authorization to repair. 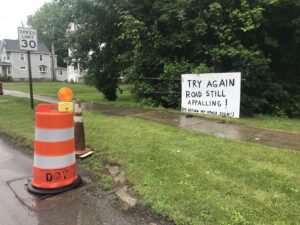 Photo by Casey Dunlap
A Liberty Street resident attended the meeting with elected officials and NYS DOT representatives and discussed the current condition of the road in front of his residence, and a large hole located at the edge of his property near a sewage drain.

Representatives from the Village of Arcade, as well as residents, elected officials, and representatives from New York State Department of Transportation (DOT) met at the boardroom in the Village of Arcade last Thursday to discuss the condition of Liberty Street and the need for a total reconstruction project. With the meeting beginning at around 1 p.m., Mayor Schiener was accompanied by Clerk Jennifer Kraft, Superintendent of Public Works Larry Kilburn, Heather Langdon, P.E. and resident engineer for  DOT’s Region 4, two Liberty Street residents, and Assemblyman David DiPietro; Vanessa McCormick, an aide with DiPietro’s office, was also present at the meeting, as was a representative from State Sen. George Borrello’s office. Also joining the meeting via phone were the regional supervisor for DOT and a representative from State Sen. Patrick Gallivan’s office.  “Yeah, I mean, I don’t disagree,” Langdon said. “Liberty Street is beyond maintenance- at this point it needs a project.”

While this meeting’s sole discussion was in regards to road construction on Liberty Street, it was apparent this was not the first discussion or request by the Village of Arcade. Langdon noted that she agreed with the consensus of those present regarding the condition of Liberty Street that it does need repairs. She said that it is now, however, at a stage when a total reconstruction project is necessary.

“… The problem is we can’t mill and fill this road, it needs a whole reconstruction,” Langdon said during the meeting. “In order to do that, we need federal aid and we need to put it on a TIP (Transportation Improvement Plan). So, obviously we are getting to a point where it is going to be difficult to band-aid it.”

Langdon noted that following previous discussions, a project to reconstruct state roads in the village would cost an estimated $25 million. This being “quite large,” according to the DOT, it would likely be best to break the work into three separate projects, with Liberty Street being the priority. The estimate for the segmented project focusing on Liberty Street – a total reconstruction from Route 39 to the Village line – could cost an estimated $5-7 million.

DiPietro advised that bigger projects with larger costs are tougher to receive approval on in Albany. He suggested that by breaking the project down and making Liberty Street the priority as the number one road in the county to be repaired, approval might be more attainable. Langdon agreed that Liberty Street is the number one (state) road, among plenty, that needs to be fixed.

“It is the worst road in the county right now,” Langdon said.

Langdon explained that the Liberty Street Reconstruction Project is currently in a draft for a TIP , which she said is required for any federally funded project. She added that she is expected to know within about six weeks if the project will be funded. After approval, the project would be in the design stages; any construction work would begin in one to two years, according to Langdon (around 2024).

“The hope is, this gets funded. If it doesn’t, maybe we need to meet again and see where we need to go from there,” Langdon said. 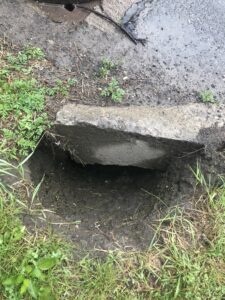 Photo by Casey Dunlap
A Liberty Street resident attended the meeting with elected officials and NYS DOT representatives and discussed the current condition of the road in front of his residence, and a large hole located at the edge of his property near a sewage drain.

Schiener asked if the roadway is safe, especially near the hole at one of the culverts, and if it would last two years. Langdon responded that as soon as the weather dried up, DOT would inspect the hole near the culvert and they would take action if deemed a safety issue.

The Village’s Superintendent of Public Works said he had correspondence with the DOT from January of 2010 mentioning the “condition of Liberty Street.” He added that he believes the condition at this time, and the concerns, were regarding rough surface, potholes and drainage, which are the same complaints the Village made during the June 9 meeting.

“I found a Jan. 2010 email to the DOT where I was complaining of the condition of Liberty Street,” Kilburn said when asked when the Village first addressed the DOT regarding concerns with the maintenance and condition of Liberty Street. “In the fall of 2010, a mill and fill project was completed. In July 2011, we were told that Liberty Street was scheduled to be reconstructed in 2014 or 2015. That project did not materialize and it has disappeared ever since from the DOT listing of projects.”

What work has been done on Liberty Street in recent years? Kilburn recalled the mill and fill project completed in 2010 had a life expectancy of two to three years and in more recent years, “they have skim paved the street in an attempt to smooth the surface. That thin layer of blacktop is typically removed by the snow plows each winter.”

He added the Village replaced a culvert last year on Liberty Street.

“Last year the Village paid to replace the culvert under Liberty Street at Mill Street. This was the result of the east end of the culvert collapsing. There is a section of NY highway law that states underground utilities installed prior to 1972 are to be maintained by the local municipality.”

What can the community do?

“We are asking for all the community support we can get,” Kilburn said. “I believe we have some momentum this time.”

Langdon and the DOT stated they would supply the Village with a list of contacts on who to send letters of support to, but this was not received by the newspaper prior to publication. The Village also discussed putting together an online petition where community members could visit their website to sign electronically.

**Editor’s Note: This newspaper reached out to Langdon and DOT with questions at the same time we contacted the Village for follow up but did not receive a response prior to publication. Should further information be provided, we will update on our website and in future publications.

On June 13, Ten Broeck Academy of Franklinville and Pete...

Students from Pioneer High School recently got together to make...

As the years have gone by and times have changed,...

You have 0 more free access opportunities without subscribing.
Near me
40 miles